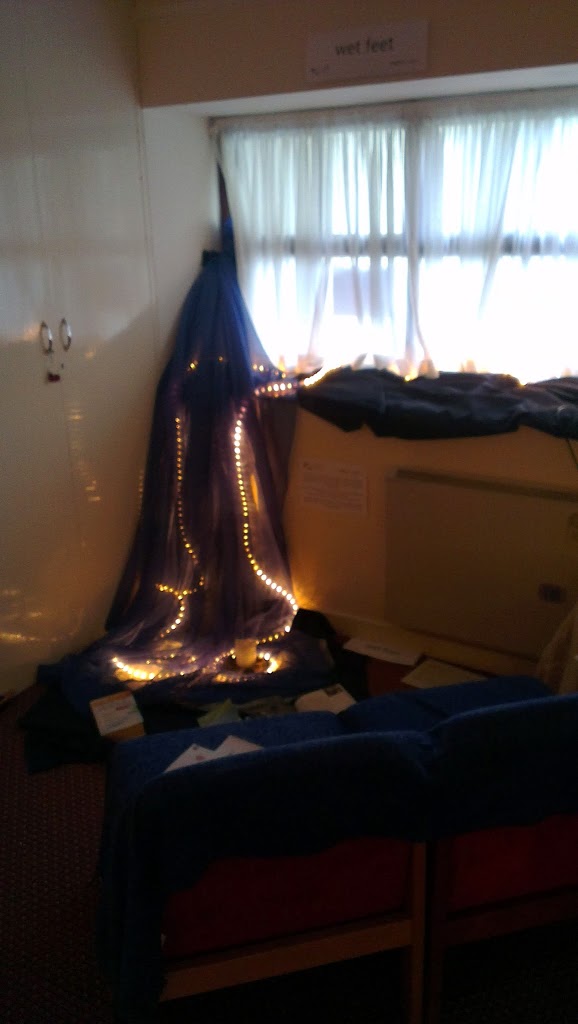 At the encouragement of the Methodist Church in Ireland, we operated a prayer room for 24 hours on 25-26 January 2014. While the emphasis was put on helping as many people as possible to pray in a focused way during that time, rather than specifically covering every hour, only four hours went without cover – and the room was used a few times after the original ‘night and day’ period was complete.
There were six areas in the prayer room; the first depicted a waterfall and encouraged us to step into the water – a challenge to get ‘wet feet’ even during our time in the prayer room, an openness to God’s leading and a commitment to follow.
The second area focused on the Methodist family in Ireland. Younger visitors painted their vision of the church family. Participants were invited to pray for one or two Methodist congregations in Ireland that they hadn’t been to before. Some wrote their selections on a map – Ballymoney, Ballynanny, Bannfoot, Blanchardstown, Carlow, Carnlough, Cloughjordan, the Down District, East Belfast Mission, Galway, Pettigo, Shannon and Skibbereen.
The third area offered space to reflect on our personal holiness – an opportunity to confess sin to God and rest in his grace-filled presence. The fourth gave a simple example of how to share the change brought about through faith in Jesus: a step into courageous evangelism. People completed ‘from… to…’ cardboard testimonies, using just a few words to indicate God’s transformation.
Some examples included: from being lost and lonely, to knowing God’s life-changing peace and love; from being worried, to being the most happiest person in the world; from despair, to hope; from encountering a difficult time, to the ability to help and support others in a similar situation.
For many people, by this point their hour had already come to an end! But those who were able to linger engaged with the fifth area, with a challenge towards compassionate social action. The final part of the prayer room helped participants to consider what idols there might be in their own lives and in the church – a couple of responses pointed towards selfish pride, and fear regarding a lack of resources.
The impact of the prayer room was felt by each of the children and adults who used it. One younger person commented afterwards, “It made me think I am special and thoughtful. God is always there. He is so nice, kind, lovely, special.” An adult wrote in the guest book, “Peace and understanding – a lovely experience. Perfect atmosphere to meditate and reflect.” And another, “So peaceful. Quiet space. Just sat in His presence.”
The effects of this prayer-full weekend continued to be felt in following weeks, with a fresh sense of God’s presence in worship, a fruitful Church Council retreat day, and a commitment to pray for the town and its churches at a special praise and prayer event to be held in March.

Prayer rooms take a fair bit of work to set up, organise and maintain. But is it worth it? Absolutely.